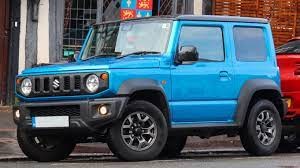 Suzuki Jimny refers to a light off-road vehicle produced by Suzuki Corporation of Japan, and its English name is “JIMNY”. It also enjoys a high status among the off-road enthusiast community. The Jimny looks very cartoonish, but also has a strong retro style, and the models are all three-door versions. While slightly less practical, it gives the Jimny an excellent visual. The head of the car has integrated headlights and a wide air intake grille, which looks like a “little jeep” from a distance. The Jimny has 190mm of ground clearance, which is impressive for such a petite car. The tires are 205/70R 15. 15-inch five-spoke rims. The rear door is also horizontally open, full of off-road style.

The biggest change in the face lifted Jimny is its exterior design. The grille body of the new car is still a five-hole design, but its position has been changed, and a diaphragm design has been added to the center of the grille. In addition, the new car’s front bumper, fog lights and other details have also been changed.

In terms of interior, the redesigned Jimny still continues the current design, with straight lines outlining a tough visual effect, which is also very in line with its hard-core off-road identity. Suzuki Jimny interior is mostly plastic parts, giving people the feeling of relatively cheap. But the workmanship is decent, which is also one of the advantages of Japanese cars. The design of various buttons is also very “old”, after all, this is not a car that impresses people with its interior. But the Jimny’s seats are very good, the sports seats are well wrapped, and the fabric fabric is not slippery, but the rear seat is crowded because of the small size of the body, and it can only carry up to four people. Legroom is poor, but headroom is decent because of the Jimny’s taller body. There is a lot of storage space in the car, but the volume of the trunk is really small. If there are people in the back seat, you can only put small items such as a satchel. If you want to travel with the whole family, you should not choose the Jimny…

Jimny’s engine has a 1.3-liter displacement and a small displacement. The maximum power of 83.8 horsepower and the maximum torque of 110N·m can only be regarded as ordinary. But the Jimny’s weight is just over a ton, so this engine has no problem pushing her over the mountains. Although the 1.3-liter engine is not very powerful, in Japan’s native Jimny, the most commonly configured diesel engine is only 0.66L. It is a pity that due to policy reasons and the extremely bad domestic oil, we are not blessed to enjoy this small but powerful engine.

However, the upper part of the bonnet of the new car has a design similar to the intercooler air intake, but it is understood that the face lifted Jimny will still be equipped with a 1.3L engine, but after the power has been adjusted, its maximum power has reached 88 horsepower, and the maximum torque has reached 118. ox rice. The transmission part is still a 5-speed manual and a 4-speed automatic transmission. The four-wheel-drive system that can switch the drive form freely is still standard.

The Jimny is not a perfect car, let alone a cost-effective car. The status of pure import determines her higher price and expensive use cost, but it is a real hardcore off-road vehicle! The built-in girder body, the low-speed four-wheel drive system, and the recalculating ball steering design have all witnessed her extraordinary off-road ability…

If you want to buy a car as the first car for the family, drive it yourself and fit the family, then don’t choose the Jimny, she is too small and the maintenance cost is too high. However, if you are a single young man who loves life and wants to have a typhoon, beautiful, sturdy, and off-road capable car to accompany you to travel around the mountains and waters, then Jimny is designed for you!

The size of the Jimny is a miniature car, but it is small and complete. The concept of light 4×4 is that it is light, compact, and powerful. It adopts an authentic off-road beam frame and non-independent suspension. The four-wheel drive system has a low-speed gear. , the off-road capability should not be underestimated, it can gallop freely on various terrains, but the performance of the 1.3L displacement is weak on the road.